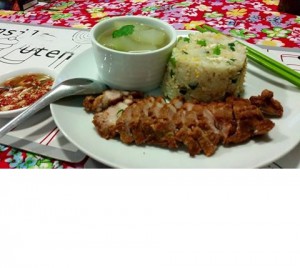 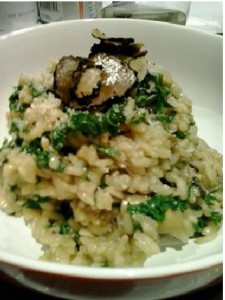 Recently I had a little conference with a dietician, a chef and an Afghan friend about rice and this questions came up. It resulted in a very interesting conversation, at least to me.

Basmati rice has a relatively low GI of 69 value (the lowest white rice) and is probably the best white rice for diabetics, but can we get it lower.

All starchy foods like rice contain at least 3 types of starch, I will explain.

Starch is a polysaccharide which is digestible and made up of a large number of glucose molecules and will digest or be broken down to glucose (a sugar). That is right, sugar,  the enemy of diabetics.

I like to think of three types of starch:-

OK let me go back to the conversation:-.

So let us soak rice for a few hours, we only had time for 3 hours in our discussion and I was surprised by how much “starch” was removed in this time. 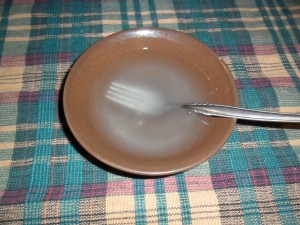 I have since started soaking my rice for 24 hours and I do think it is “more fluffy”.

I have no scientific evidence that this lowers the GI of Basmati rice but it makes sense to me. If you remove some of the soluble starch and surely the GI value must fall. I would be interested in feed-back on this subject.

Other ways to lower the GI of rice.

It is claimed the recooking cooled rice increases the fibre (the resistant starch in rice), I think that it is more likely that the soluble starch has gone down the sink. But there is some science behind the claim:-

Your favourite staple just got healthier.

In fact, one cup of cooked rice contains around 240 starchy calories that can be quickly converted into fat if they’re not burnt off.

But researchers in Sri Lanka have discovered a simple way of cooking the grain that dramatically cuts its calories by as much as 50 percent, and also offers some other important health benefits. And we’re never going to cook rice any other way again.

According to the 2015 study, all you need to do is get a pot of water boiling, but before adding your raw rice, you add coconut oil – about 3 percent of the weight of the rice you’re going to add.

This is a picture of the soluble starch that I obtained from 1/4 cup of recooked rice. 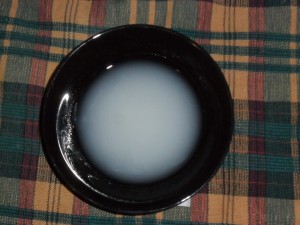 A dietician (not my friend) claims that adding shirataki noodles or Slendier noodles (they’re the same thing)  a Japanese noodle to rice lowers its GI.

*This recipe is not my original concept! It’s just my preferred technique.

Effect of chicken, fat and vegetable on glycaemia and insulinaemia to a white rice-based meal in healthy adults.

“The glycaemic response (GR) to white rice with chicken breast, ground nut oil and vegetable was significantly lower than to white rice alone. The glycaemic index (GI) of pure white rice was 96, whereas combined with chicken breast, ground nut oil and vegetable, it was 50. The addition of oil delayed the peak glucose response and reduced the iAUC, resulting in a GI value of 67. The addition of chicken and vegetable resulted in a GI value of 73 and 82, respectively. The insulinaemic index (II) of the white rice-based meals varied between 54 and 89. Chicken breast in the meal increased the insulinaemic response and decreased the GR. White rice II was lower than the glucose control, which indicated that the former was not as insulinogenic as the latter. White rice with vegetable had the lowest II.”