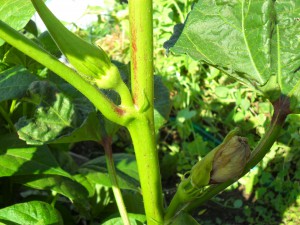 If you don’t live in the warm southern climates of the United States, you may not be familiar with okra. Also called “ladies’ fingers,” it’s an annual vegetable that belongs to the same plant family as hibiscus and hollyhock. It likes full sun, and can reach up to 6 feet tall with beautiful white and yellow flowers that are about 3 to 4 inches wide. The green seed pods are about 7 inches long and are best harvested when they’re tender. They become woody and flat tasting if they’re left on the plant for too long.

Once the okra is harvested, it can be prepared in a number of different ways. Slice it up, and it releases a gelatinous substance when cooked, which makes it useful as a thickener in soups and stews. When left whole, it won’t release this substance, and can be fried or added to casseroles. Okra is popular in Indian, Creole, Cajun, Southeast Asian, Caribbean, and Middle Eastern cuisines.

In addition to tasting great, many have touted okra as being a great weapon against diabetes. But can this vegetable really replace your diabetes treatment?

Studies on Okra and Diabetes

Not too long ago, a number of email and Facebook posts stated okra could stabilize blood sugar levels in people with diabetes. One had only to soak the vegetable in water overnight and drink the water the next morning. A lot of people were understandably intrigued. Imagine not having to rely on insulin and other medications to normalize blood sugar levels and reduce risk of complications.

Okra has been used in some traditional cultures for generations to help stabilize blood sugar levels. Modern studies have also reported it may provide some benefits for those with diabetes.

In a 2011 study published in ISRN Pharmaceutics, researchers tested okra in rats with diabetes. Researchers soaked sliced okra pods in water and then gave the rats the solution through a gastric feeding tube. A control group did not receive the solution. Results showed that the okra helped reduce the absorption of glucose, which in turn reduced blood sugar levels in the treated rats. The researchers noted that okra is a rich source of dietary fiber and has been traditionally used to manage diabetes.

In a similar study published in the Journal of Pharmacy & Bioallied Sciences, researchers again tested okra in diabetic rats. They used powdered okra seed and peel extracts. After up to 28 days of consuming the extracts, the rats showed a significant reduction in blood sugar levels. Their triglyceride levels also returned to normal. Scientists noted that though both extracts were effective, the seed extract produced a greater blood sugar level reduction. Researchers tested high levels of the extracts, as well, to see if they would be safe. They found that a dose up to 2,000 milligrams per kilogram of the rats’ weight did not create any health problems.

Though these studies look promising, so far, we are limited to research in rodents. Researchers don’t yet know if these benefits will transfer to humans.

Another concern could prove vital. In the first study above, researchers found that when rats ate okra and took metformin, the effects of metformin were almost cancelled out. The okra seemed to interfere with the animals’ absorption of metformin, a medication commonly used to manage blood sugar levels. If you’re taking metformin and you consume too much okra, you could possibly see your blood sugar levels creep up instead of down.

Some people claim that consuming okra water will make diabetes “go away.” Currently, there is no evidence to support that claim. Even if future studies show that okra can help control blood sugar levels, there is no evidence to suggest it would actually cure diabetes. People with diabetes need to continue to watch their diet, maintain a healthy weight, and exercise regularly.

Okra is a Healthy Vegetable

Even if okra doesn’t help manage blood sugar levels, it has a number of health benefits:

Should you drink okra water every morning? Your doctor probably wouldn’t recommend it — particularly if you’re taking metformin. However, like all vegetables, okra is a positive addition to your daily diet. If it helps to lower your blood sugar levels at the same time, that’s like sugar-free icing on the cake.

Was this article helpful? Yes No