Fifteen years ago, my doctor discovered that I was a diabetic. At that time, we could not tell if I was type 1 or type 2. I guess I was like most people, I was enjoying life to the full.

In many ways, I was an adrenalin junky. I enjoyed those things that gave an adrenalin rush, like pig and deer hunting and fishing. I am and will always be the country boy who lives his life to the fullest.

Over the last fifteen years I have known many diabetics, sadly some of them are no longer with us.

In my experience diabetes follows the following path:-

While this progression for many of us is inevitable, we can slow its progress. After fifteen years, I have finally reached level 3. I am on a very low dose of oral medication.

You too can stall the natural progression of diabetes and achieve a healthy lifestyle by making a few simple changes to your diet and daily program.

As you advance through this book, I will explain these simple changes but first let me continue.

There is still one thing that turns me to jelly and that is needles. The idea of putting a needle in my gut several times a day frightened me more than any rushing boar.

I decided that I needed to do something about it. What I have learned since then is simple. You cannot cure diabetes, but you can slow down its progress. The question is how?

I was not like anybody else. I attended meetings with diet consultants and diabetic educators. I also met with other people who like me had also been diagnosed as diabetic.

After fifteen years, I have graduated onto a low dosage pill while many of those who were diagnosed with me and after me have suffered terrible complications from the disease. And sadly, many of them have passed away.

In fact,  a lot of my friends are no longer with us due to heart and vascular disease. I believe that if they had followed a few simple guidelines to healthy living, they would still be here with us now to enjoy life and see their grandchildren grow up.

Let me make this clear from the start. There are approximately eight billion people in the world. This means there are about eight billion different ways of thinking and it is not my duty, nor right, to tell anyone how to go about their life.

What I hope to do through this book is to help others make a few simple lifestyle changes so they could live healthier and feel better about themselves.

A friend of mine once said: why prolong the agony? Needless to say he would not change his lifestyle; in fact, his diet was a time bomb that eventually exploded.

I say if you make a few simple changes, the agony will disappear and we will enjoy the last few years we have left.

Why I sit down to write.

Not too long ago I found myself in western Sydney with my family. We decided that a steak would make a good meal and a change from our regular diet.

We booked into a Steak House. Once we found a table, the waiter came over to take our order.

“I will have a cowboy T-bone,” I said. “Do you have a diabetic option for your vegetables?”

Now I should not say this but the waiter’s grasp of English needed attention. He shrugged his shoulders and hurried off.

After a few moments, another gentleman appeared at the table.

“I am the manager. Do we have a problem here?” he said.

“No, no problem,” I replied. “I simply asked if you have a diabetic option for your vegetables.”

“I do not know,” he replied and hurried off.

A few minutes later, a rather large man appeared.

Now, what followed was a well-practiced speech about how this was a family restaurant and as such we were guests in his house so were expected to behave as such.

“Do you have a diabetic option for your vegetables?” I asked as he attempted to turn away.

With that, he disappeared never to be seen again by us anyway.

Surprisingly, when the meal appeared a short time later, with no feedback from the staff, it was a good diabetic option.

The fat was cut from the steak, the vegetables were grilled corn and steamed snow pea and carrot with a generous serve of sweet potato.

It is such a shame that we, diabetics, and others with health needs, need to go through this process too often.

It is frustrating that those people who work and own eating places cannot or do not accommodate anyone who is not in their box.

They want to talk the talk but, in my experience, they do not want to walk the walk.

There is another thing that really gets on my nerves. And that is the so-called top chefs claiming that their meals are healthy. 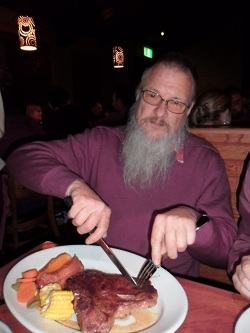 Now the dish was served with fresh cherry tomatoes.

And the chef claimed it was healthy. Now come on that is about as honest as a woman cook saying her dish had a hint of woman inner thigh.

I have been encouraged to do this by several people. There are two I will single out. The first is my brother who is a top chef, the second is my son, a doctor. Both have eaten several of my everyday meals and have found them surprisingly good, tasty and healthy.

While they would not sell in a top restaurant in any capital city, they are not meant to. There is an unfortunate fact of life, if you buy a meal, say a $2 special or a $500 steak, it will not be healthy. They all contain cheap nasty oils or butter, unhealthy (bad) fats and all too often, a lot of salt. These need to be in these meals to add taste.

So I sat down one night and put my thought on paper (actually a computer screen).

I hope you enjoy this book as much as I did writing it. It is my wish to share ideas that may work for you in an enjoyable way.

If you can take away just one idea  from my stories and life experiences, then my job is done. 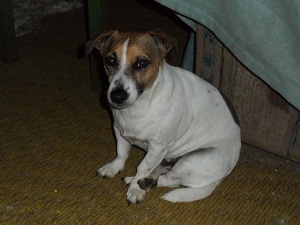 As you work through these pages there will be occasionally a photograph that includes my puppy dog Tex, see if you can find Tex.